When Tobacco Was King of Lynchburg Virginia

There are multiple species of tobacco, which is in the same botanical family as eggplant, tomatoes, potatoes, and chili peppers. Nicotinia rustica and Nicotiana tabacum were domesticated in the Andes of Peru and Ecuador, and migrated north with the help of Native American farmers. Tobacco is not native to Virginia, but it was being grown in North America by Native American farmers 4,000 years before Jamestown was settled.

John Rolfe is credited with importing the seeds of a different species, Nicotiana tabacum, perhaps via a smuggler who obtained the seeds on a Caribbean island controlled by the Spanish. Thanks to Rolfe, Virginians grew a species of tobacco that was less harsh, with less nicotine, and competed successfully against the Nicotinia rustica imported to Spain. 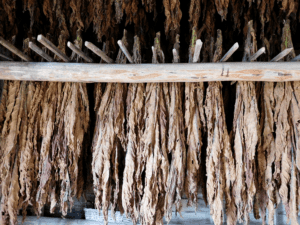 Tobacco growing and processing dominated Virginia’s economy for over three centuries, and transformed its landscape. Tobacco wears out the land, exhausting minerals and nutrients from the soil. The first Virginia colonists to acquire ownership of land were positioned to gain great wealth, permitting them to abandon old fields and plant in fresh soil that would produce great quantities of the crop.

The hunger for new land was fundamental to Virginia’s colonial claims to the Ohio River Valley and to Kentucky. Virginians seeking new places to grow tobacco created conflicts with Native American tribes long after Powhatan’s paramount chiefdom had been subjugated and the Coastal Plain had been occupied by European trespassers. Early towns in Virginia, including Alexandria, developed at locations where tobacco inspection stations and warehouses were built.

Growing tobacco is very labor-intensive, so in the 1600’s the Virginia gentry who had acquired land needed to import a labor force. 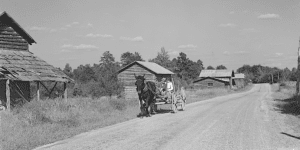 Imports of indentured servants were spurred by grants of headrights, but the supply of interested immigrants from England declined after the end of the English Civil War and restoration of Charles II to the throne in 1660. Religious and economic refugees were recruited from France and what today is Germany in the 1700’s, as were the Scottish settlers in Ireland who sought greater opportunity in the New World.

However, by 1700 it was clear that the Virginian leaders had committed to getting their labor from Africa. In the second half of the 17th Century the Virginia gentry institutionalized and expanded slavery for one primary reason: to obtain the labor needed to farm tobacco. Without tobacco, slavery in Virginia may have died out as the practice did in the northern states – and without the economic factor of slavery, Virginia might have chosen to stay with the Union rather than join the Confederacy in the American Civil War in 1861-65.

Tobacco seeds are very, very tiny. Tobacco seedlings are grown in seedbeds of very fine soil, then transplanted to farm fields in the late spring after all danger of frost is past. Each slave or indentured servant working on a tobacco plantation in colonial days may have planted and weeded about two acres of cleared land with 9-10,000 plants a year, requiring bending over perhaps 50,000 times.

Tobacco drained the soil of key nutrients, requiring labor to clear forests so tobacco could be planted in fresh soil. “Old fields” had to remain unplanted for one-two decades before soil fertility was restored naturally (unless fertilized with animal manure). The most economical way to grow tobacco was on large farms, where most of the acreage could be left unused for 20 years.