The Quite Miraculous Story of Amazement Square

Turning back the pages of the J.W. Wood Building’s history, one thing becomes clear: the bricks and mortar that make up this unique, Civil War-era structure have meant many things to many people. Over the course of the past 150 years, the J.W. Wood Building has served as an infirmary for the Confederate Army and a commissary store in the late 1860’s, as a warehouse and wholesale grocery firm in the 1930’s and finally, after several decades of being unoccupied, in 2001 it became the home of Lynchburg’s first hands-on, multidisciplinary children’s museum, Amazement Square.

As one of the largest and best-preserved Civil War-era commercial structures remaining in Lynchburg, the building figures prominently in the city’s history. Its proximity to both the James River and the railroad, the area’s former major trading routes, indicates that it played a significant role in Lynchburg’s economic development. Today it is a visual reminder of the city’s tremendous commercial activity in the mid-nineteenth century, the period in which Lynchburg was declared by the United States Census to be the second richest city in the country on a per-capita basis.

The J.W. Wood, which is on the National Register of Historic Buildings, reflects the same Greek Revival vernacular of many of the residential houses of the late nineteenth century. The most notable and distinguishing feature of the building is its first floor cast-iron façade, the earliest surviving example of its kind remaining in Lynchburg. Composed of seven Corinthian pilasters decorated with high-relief cartouches and Corinthian capitals, the façade is divided into six bays that support an entablature with modillion cornice. Restoring this façade to accurately reflect the building’s original beauty presented a challenge for Amazement Square during the first stages of the renovation process. 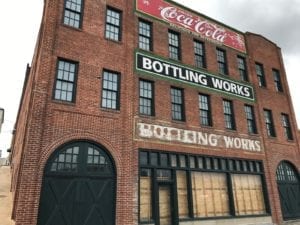 What presented even more of a challenge, however, was determining the best way to clean the exterior walls of the building without damaging its surface. By using a low-pressure, water and soda-cleaning technique, signage reflecting the building’s history as a wholesale grocery firm and warehouse was revealed.